Don't just throw that pen away!

Back around 2001, my wife and I went to Amsterdam.  Unfortunately, my wife remembers very little of this trip and that is another story.  On the KLM flight home, the flight attendants passed around a brochure of items that you could purchase on the plane, duty free.  I had some left over traveler's checks so I figured, why not.  I found a Mont Blanc pen on the sheet.  I had never had a fountain pen and thought it might be nice. It cost around $100. I still remember, it was called the Traveler, and it stored ink cartridges inside. 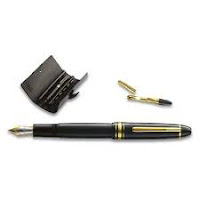 Every couple of years, I would find the pen in the drawer, and see if I could get it to work.  NOPE.  Stupid Pen.  Never threw it away.  Five years ago, sent to Mont Blanc and they cleaned it and said it worked okay.  NOPE!  Sigh...forget this stupid pen.

While cleaning out my office last week, I came across the pen again.  It had sat in that drawer for at least two years, maybe three.  I brought it home.  Last night, I had to go to the Apple Store in a ritzy Tampa mall.  I remembered there is a Mont Blanc store so I brought the pen and figured maybe THIS time, someone could make it work.  Upon bringing the pen in, I was asked if I could leave it for a half hour so they could take a good look and check it out.  About an hour later we returned to the store.  The woman pulled out the pen and said she cleaned it.  You opened it up and cleaned the whole inside, I asked?  She looked puzzled.  Opened it up??  I said, it stores ink cartridges inside.  She said, "Oh...It's a Traveler!"  I shook my head in the affirmative.  I opened the pen for her and we tried different cartridges and no good.  She said I could send it in to repair.  Thinking at this point it was hardly worth it, I was contemplating dropping it in the trash...when a sudden urge came over me..."Do you still sell this pen", I asked?

The answer, YES!  I asked if they had one and they did.  "How much do they sell for", I asked?

Guess it's good not to just throw away those old pens!

If you need to accept credit cards or want a better rate, visit www.PayByWeb.com.  Accepting all merchant types, offering free terminals, and same day approvals...PayByWeb is the clear choice for merchant accounts.
Posted by David Weiss at 12:42 PM